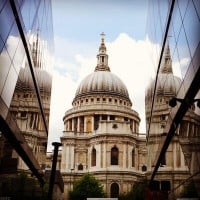 The speakers included George Graham (RBS), Tony Greenham (NEF), Julia Groves (UK Crowfunding Association). The full video of the event can be viewed here, and a graphic artist also made a recording of the discussions, which can be viewed here.

Since the crisis we have also seen the LIBOR scandal and foreign exchange market rigging. Most High Street banks are still paying out for Payment Protection Insurance mis-selling. The joint CEOs of Deutsche Bank have just resigned, HSBC and Barclays are embroiled in tax avoidance scandals, and RBS is still in 80% owned by the tax payer, but worth much less than when it was bailed out. And it is being pursued by a lot of anger SMEs over their treatment by the bank.

Throw in the full scale Competition and Markets Authority investigation, due in 2016, and that the most fundamental bank structure changes – the ringfence proposals – are not due to come into force until 2019, and it is hard to see why the recent election campaign spent virtually no time on financial reform.

The following evening at the Mansion House, the Chancellor set out his view to the elite of the finance world.  He seems to want to give the message that it’s all fine, and the quicker we can get banking to business as usual, the better for all concerned. So, state shares in banks will be returned to private hands as soon as possible, probably at a loss. The Bank Levy will be reviewed and he is under increasing pressure to water down the ring fence proposals or see big banks relocate their headquarters. The headlines read that we should all now stop ‘bashing the bankers’.

That view, however, is really only held by those who currently run the finance system: elite policymakers and senior executives large financial institutions. The Lab event, in contrast, brought together a panel and audience with deliberately diverse perspectives on the finance system, where they debated, listened and learned.

Whilst debate was wide ranging, a theme which ran through the evening was the need to define the purpose of banks. James Vaccaro, from Triodos, described how a bank rooted in the real economy can truly reflect the values of its customers. Patricia Jackson, from EY, and a former Bank of England regulator, debated with Tony Greenham how resilient a system with more local banks might be. George Graham reflected how hard it is to change the culture of a large institution, whilst Julia Groves championed the degree to which real competition in finance could disrupt the market faster than we may think.