Future Regulation of Finance: More of the same, or an opportunity for change? 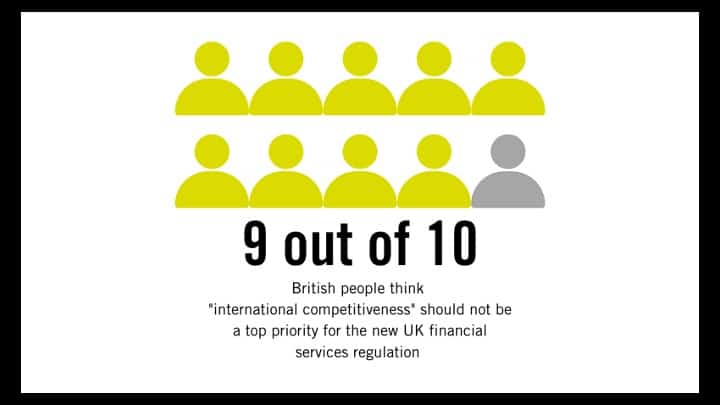 In February, a critical consultation closed on the future of financial services regulation. According to the government, this was a “once-in-a-generation opportunity” to establish an “approach to financial services regulation that is right for the UK”. The consultation raised fundamental questions about what the rules that shape finance are for, and who holds power over them. With the outcome set to shape policymaking and the role finance plays in our lives for years to come, the Lab has been following this consultation closely and working with civil society organisations to ensure that any changes are good for people and planet.

Last year, at an earlier stage of the consultation, we outlined three ways the government could show global leadership and create a better financial system. We were pleased to see that in the final consultation the government has paid more serious attention to the role financial regulation can play in helping to achieve environmental goals. However, as we argued in our latest submission, the government must go further to uphold the UK’s reputation and success as a world-leading financial centre.

In fact, the consultation contains a dangerous flagship proposal on ‘international competitiveness’ that could prove detrimental to financial stability and consumer protection – and risks undoing the UK’s pioneering work of the last decade to address systemic risk. The proposed objective intends to encourage brazen growth of financial services so that the UK can top the global standings. This is different from a ‘competition’ objective, which our regulators already have, and can drive better outcomes for consumers through securing greater choice and lower prices.

The financial services regulator had a focus on competitiveness in the years before the global financial crisis of 2007/08 – the cataclysmic event that cost the world economy $10 trillion and saw millions lose their savings, homes and jobs. As current Governor of the Bank of England Andrew Bailey said in 2019, when he was CEO of the Financial Conduct Authority, the regulator “was required to consider the UK’s competitiveness, and it didn’t end well, for anyone”.

We, too, would question whether the growth and competitiveness of the finance sector are appropriate objectives for financial regulation. We believe it’s critical that the government learns from the past. It’s clear that a focus on competitiveness played a part in creating the instability that led to the financial crisis by shifting attention away from the impact of the actions of the financial services industry on everyday citizens and turning the regulator into a cheerleader for industry. As Bank of England Deputy Governor Sir Jon Cunliffe said just a few weeks ago, lessons about the importance of financial stability were “painful and hard won”, and he expressed his hope that, “as those events become more distant, we do not forget them”.

The British public are also opposed to regulation that prioritises competitiveness. In January we commissioned a nationally-representative, UK-wide survey to understand what the public felt should be a priority for a new regulatory framework for financial services. Over nine in ten respondents (91%) said that international competitiveness should not be a top priority and instead the government’s planned new regulatory framework should focus on the future stability of the financial system, consumer protection, and financial inclusion.

This consultation could present a chance to maximise the finance sector’s contribution to the economy, society and long-term ecological sustainability. For example, the government could introduce an objective that delivers long-term, sustainable and real economic growth. This could give regulators the necessary powers to actually deliver the levelling up agenda and the support much needed by left-behind communities. The government could also make the UK a world leader in action on climate change by giving regulators a new objective to align the financial system with the 1.5 degree temperature goal of the Paris Agreement and the Glasgow Climate Pact. And it could go further in its proposals to improve accountability and create a powerful committee to scrutinise new regulation, with public interest at its core, to balance out the influence of industry lobbyists.

Over the past few months, we have been working with civil society organisations, including Macmillan Cancer Support, Fair by Design, Greenpeace and the RSPB, to raise awareness of our concerns and present a new vision for financial services regulation. On Friday 4 February, we co-signed a civil society joint statement, with 36 organisations, that put forward six recommendations to strengthen the government’s proposals to ensure that we make the most of this opportunity to reshape the rules of financial services.

1) As 37 civil society groups we welcome the opportunity to respond to @hmtreasury's Financial Services Future Regulatory Framework Review: a once in a generation chance to improve rules that support UK finance. Our statement: https://t.co/yaj7kseFoj#FinanceForOurFuture
↓ pic.twitter.com/aJBotObKFc

Our campaign has sparked quite a bit of debate and has been featured in the FT, Reuters, City AM and Politico. Our Head of Policy also spoke on Sky News and we’ve gained traction on social media with the hashtag #FinanceForOurFuture.

Our work doesn’t stop here. If you’d like to get involved or just to find out more about the Transforming Finance Network, please get in touch.